How to give feedback, the Netflix way. 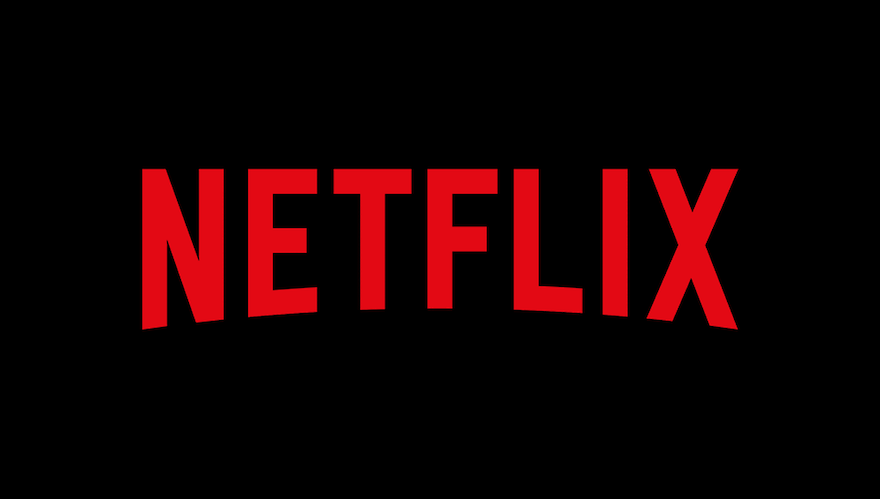 Learn more about GTM Design in my weekly newsletter

Netflix is famous for their open, candid feedback and unusual company culture. When a company has extraordinary results, like this 👇, it's going to require an extraordinary culture code. 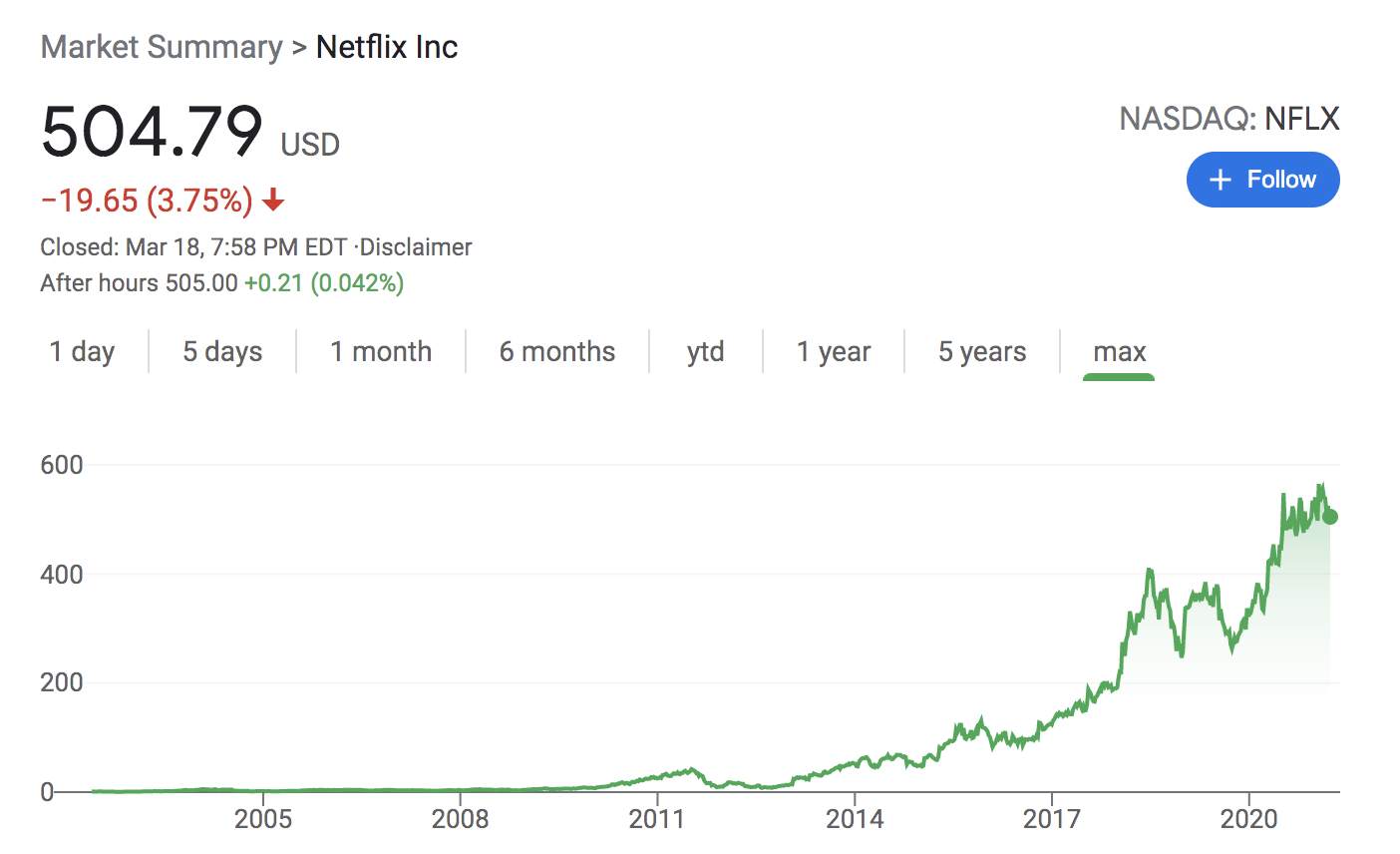 The Netflix Culture Deck is a 127 slide deck that made it's way into startup land when the CEO, Reed Hastings, shared it publicly on the internet in 2009. Inside were many of the secrets to a culture code that built one of the world's most impressive powerhouses.

After reading the culture deck, I decided to read 'No Rules, Rules' by Reed Hastings & Erin Meyer. One of the takeaways I got was how to give feedback... the Netflix way!

Netflix follow the 4A method to giving feedback, it consists of the following:

Feedback must be given with the aim to assist, not to bring someone down. An example, of the latter would be giving feedback to voice frustration. Hence why giving feedback in the heat of the moment is not ideal.

If the goal of the feedback isn't to help a person improve then it shouldn't be given.

Perhaps you remember when your mother says 'if you haven't got anything nice to say, don't say anything at all'... well just replace 'nice' with 'useful'.

Every piece of feedback should be beneficial to the person and therefore the company.

In fact, the absence of feedback can be seen as an act against the company, because you are knowingly preventing from assisting someone improve.

Your feedback must focus on what can be improved upon. Many people give feedback but stop at the most important part. For example,

note that this feedback stops before it becomes actionable.

"when you're passionate about a particular subject your tone of voice can be domineering, it would be better if you speak with the same level of passion but pause and ask a question to include other people's perspectives and show you care about other perspectives"

Sometimes, it's not always possible to give the actionable advise, but the effort to include information that can ensure the receiver is on a path to improving is critical.

Taking the time and effort to make feedback actionable shows that you truly care about the receiver too. Making it much more likely to be listened to.

Receiving feedback, regardless of whether you work at Netflix or any other startup, can be unsettling. Our reaction is often to be defensive. Even if you don't voice your defensiveness, it's almost unavoidable to feel uneasy when receiving direct feedback... after all, we do care about what people think of us!

Appreciation is all about showing the person whose giving feedback, that you appreciate their effort to help you.

Increasing the speed and frequency of feedback accelerates progress. Showing appreciation for someone's feedback can help remove the friction from them giving it a second time, increasing the frequency and thus progress.

A simple 'thank you'' will often suffice, but if the feedback came in handy and you implemented it, mentioning to that person the effectiveness later of said feedback can act as a reminder of how helpful their feedback was.

As mentioned above, you want to encourage as much feedback as possible, but not all feedback will be relevant, nor useful.

You must know when to accept feedback and when to discard it.

Note: Make sure however you don't discard feedback just because it feels uncomfortable. Instead, take into consideration where the feedback came from and it's context, and make an objective decision as to whether you should use it or not.

This was a game changer for me personally. I remember having an interview with a candidate where I challenged their response to losing a sales deal. The goal of my question was to understand if the candidate was able to accept personal responsibility for specific areas which they could control, or if they focused on passing the blame onto other external factors out of their control (a trait we wanted to avoid in our culture that prioritizes a growth mindset and focusing on what you can control).

Upon hearing the news they didn't make it through the interview process they gave my manager some negative feedback saying:

"that was the worst interview of my life, I felt belittled by his questions"

I distinctly remember feeling annoyed by the feedback, it felt like a reflexive retort after not making it through the interview.

However, being keen to take on feedback wherever I could, I felt obliged to take their comments into consideration. But something didn't feel right about it. i felt conflicted.

When my manager turned around and said

"it's okay, just because you receive feedback, it doesn't mean you have to accept it. You need to appreciate the context in which it was given too and make an objective decision as to whether its relevant or not"

In this context, the candidate was frustrated they hadn't received a job offer and was giving feedback in an emotionally charged state. Although they felt belitted, I needed to objectively understand if their feedback was relevant or not.

If the situation occurred again I would've asked exactly the same question. In fact, their response to my question allowed me to highlight a character trait that was undesirable, a fixed mindset and not taking absolute responsibility for things within our control.

The feedback was negative, but the outcome of the situation was not.

My conclusion was to disregard the feedback.

Giving candid feedback can be easier for people who are naturally direct, but you must be careful to not be a d***.

A culture of candor does not mean that you can speak your mind without concern for how it will impact others. On the contrary, it requires that everyone think carefully about the 4A guidelines. This requires reflection and sometimes preparation before you give feedback' - Hastings, Reed; Meyer, Erin. No Rules Rules (p. 35).

I often write down feedback before a meeting to ensure that the feedback is not tainted by poor delivery.

In Kim Scott's book 'Radical Candor', she explains how caring personally for the person receiving your feedback can improve the effectiveness of the feedback and your relationship with that person. 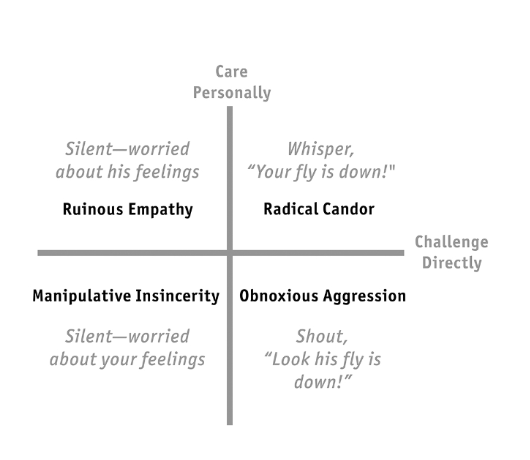 One could argue that 'being a d***' and giving feedback through obnoxious aggression is better than not saying anything at all, at least you get to hear the feedback and use it to improve.

But remember, we want to increase the speed and frequency of feedback in the workplace, the delivery should come from a place of compassion and be genuinely wanting to help the other person improve.

You must be careful when creating a culture of radical candor and direct feedback that you don't allow people to be a d***.

Employees operating in a culture where feedback is touted as being open and rewarded, but secretly punished will always fear giving feedback at the risk of losing their job.

This instinct is powerful and requires a lot of effort to overcome.

Naturally, feedback tends to flow more easily top-down, than bottom-up. Meaning managers are more ready to give subordinates feedback whereas subordinates rarely give their managers feedback.

This creates a real asymmetry in the feedback loop and cause leadership to live in la-la-land, far away from reality. Often such asymmetry in feedback loops can lead to people quitting unexpectedly or other issues that just 'appear out of nowhere'.

Management should be proactive in installing a candid feedback culture and can do this by:

Feedback should never be anonymous

Anonymous feedback leads to ambiguity, with no actionable way to clarify information. This breaks the previous rule of 'feedback being actionable'.

Anonymous feedback also makes people lazy about the delivery and can often lead to more 'obnoxious aggression' rather than 'radical candor'.

Feedback should be frequent and timely

If you have to wait until your end of year performance review to get feedback, then there's something wrong.

Where possible feedback should be straight away, perhaps leaving enough time to prepare the feedback for delivery, but always reduce the time to execution.

Leaving feedback too long can cause people to forget the specifics of a situation, and they're often left with the emotional aftertaste which can be far less constructive or objective.

Increasing the frequency and speed of feedback leads to accelerated progress.

To foster a high-growth environment radically candid feedback is critical to succeeding. There are ways to really mess it up, but if you follow the 4A framework laid out by Netflix, you'll be on your way to success in no time 🚀